Better Dig Two is the eleventh episode of Season 4 of Wynonna Earp. It aired on April 2, 2021.

Wynonna and Waverly take two very different and dangerous paths in an effort to save Purgatory.

BBD guards drag a bleeding Mercedes into the cell with Jeremy and Doc. Doc struggles to restrain himself from hurting Mercedes, while Jeremy attempts to keep him calm. In the woods, Wynonna realizes the fog is gone as Waverly explains she is the fail-safe so she doesn’t need the fog anymore. Wynonna tries to reach Waverly who doesn’t believe the affairs of men are her issue any longer. Waverly then blinds Wynonna and walks away.

Cleo and Rachel stand in the woods while Rachel points a gun at Cleo, adamant that Wynonna has a plan. Cleo reveals that the reaper in the woods was Billy, but she isn’t Rachel’s enemy, she just wants to leave Purgatory. Jolene’s hair begins to burn which means the reaper’s target is dead, so it will begin going after and Earp unless they turn Billy back into a human. In the cell, Mercedes bleeds out in pain while Jeremy and a werewolf try to calm her and Doc. The werewolf and Doc begin to fight. In the woods, Rachel bleeds on the hair as Cleo tells her that it will bind Rachel and Billy together forever. Meanwhile, Wynonna struggles to navigate the woods while Billy stalks her. She screams for help.

Wynonna runs through the woods while screaming for Waverly, though Billy knocks her over but assures her that he’s back to himself. He gives her Peacemaker and she cradles it. He helps her stand and navigate through the woods. In the cell, Doc badly wants to eat Mercedes but Jeremy assures Doc that he’s not stopping him for Mercedes but Doc, as he’s made amends and changed so he wouldn’t want to kill again. Jeremy offers himself instead as he’s lost everything that he loved, but Doc opts to hug Jeremy instead. Mercedes volunteers herself as being turned as together, she and Doc can free everyone. Doc requires her expressed consent and she gives it, so Doc turns her. Meanwhile, Nicole tries to get a signal in the woods as she hears BBD telling them that no survivors are needed in town. Mercedes and Doc use their combined strength to free themselves and the other prisoners. In the woods, Billy leads Wynonna to the clearing, and her sight returns in time for them to see that Cleo turned him back into a human and took Rachel. He convinces Wynonna to save Rachel though he can’t step foot on the Clanton land without being re-reaped. Meanwhile, Waverly looks through the town as things burn around her, and BBD agents run away screaming.

Doc, Mercedes, Jeremy, and the gang try to flee and Graham opens it at the force of Nicole, who holds a gun to his head. She tells Graham that the town is inclusive from now on but not to dickwads like him. She announces herself as the sheriff and renders him unconscious. Once outside, Jeremy tells everyone that the fog is gone, though Doc begins to hear whispering that means he has to get ready. While everyone leaves, Doc stays behind to get more guns. Meanwhile, Wynonna arrives on the Clanton land and hears the screams of the reapers. Inside, Cleo has Rachel tied up while she vents about Ma’am Clanton. Wynonna arrives and frees Rachel, prompting Hoyt Clanton to cut them off as he’s turned into a reaper. Cleo admits that the Clanton’s follow her around all the time demanding revenge, but they plan to finish this tonight. Wynonna tries to get her to stop her plan but Cleo can’t bear having the reapers with her, so she’s passing Clanton heir duties onto Wynonna. Wynonna will be forced to kill everyone she loves. Cleo begins the ritual so Wynonna gives Peacemaker to Rachel who runs away. Meanwhile, Doc loads his guns as he hears the reapers in his mind. Waverly emerges in front of Doc, telling him that she’s the protector of the fifth realm and she plans to get her property back, the book, for then she can return home. Doc is prepared to fight just as the Clanton mark is burned into his hand and he vanishes. At the junkyard, Wynonna doesn’t feel any different and Cleo realizes the spell didn’t work, though Doc emerges from behind her to declare he is the Clanton heir.

Doc forces Wynonna into the stone circle while the reapers surround them. Cleo flees the junkyard. Wynonna tries to escape but can’t as the circle has a shield around it. She tries to reach Doc who is intent on having a duel in front of their ancestors. She refuses though Rachel throws Peacemaker into the circle as she’s been restrained by Hoyt. Doc threatens to kill Rachel if Wynonna doesn’t pick up the gun. She refuses to participate unless he spares Rachel, and when he agrees, she obliges and picks up the weapon. Meanwhile, Nicole ushers everyone into a van to escape the BBD headquarters. Jeremy tells Nicole to go to the stairs to get Nicole. At Shorty’s, Nedley is joined by Billy who begs him for help as he wants to become the Clanton heir instead of Doc. At the junkyard, Wynonna and Doc turn around and he turns to fire though Wynonna doesn’t, as she knows his code to never shoot someone in the back. He falters as she apologizes for breaking the code, but he eerily says the Clanton’s have no code. Wynonna shoots the force field so it will ricochet and kill Hoyt which frees Rachel. Doc fires but the gun misfires as he loaded it with the wrong bullets. She drops next to him as he bleeds. Meanwhile, Randy and Billy perform the spell to turn him into the reaper. Doc tells Wynonna that they have stalled but not for long, telling her to finish what he started. She tells him she wants him in this life but he tells her to kill the reapers and him as this is the last thing he will ever ask of her. She knows it’s wrong as he falls to the ground. Waverly appears.

Wynonna asks Waverly to save Doc but she is hesitant so Wynonna tries to appeal to her as the Earp heir, the champion. She kneels in front of Waverly, admitting that she’s given everything and lost everything, so if Waverly is leaving her too then she can at least save the man they both love. Waverly requests the book in return. She resurrects Doc and pulls the book from Wynonna’s emotional grasp. When Waverly walks away, Wynonna falls to Doc’s chest. As Waverly leaves the junkyard she comes across Hoyt and turns him into a bird, along with the rest of the reapers. She retreats to the stairs where Nicole tries to stop her. Waverly remarks that the gate must close so she must be the one to do it. Nicole wonders what will happen to Wynonna, but Waverly thinks the champion has served enough. Nicole instead asks Waverly to let her extend her watch over the entirety of the Ghost River Triangle in all the realms, to watch over all the beings demonic and human alike. She will give up anything to keep Waverly safe. Waverly marvels at Nicole’s choice to become the shield, remarking that she already broke the rules once. Nicole tells her to look in the book as it has her story in it too. Waverly warns her that she would be bound to the Ghost River Triangle forever. Nicole assures her that she’s sure of her choice. Waverly hits her with magic and Nicole recites an oath before becoming the angel shield as she’s blasted backward. Waverly returns to normal, chucks the book into the doorway, and rushes to Nicole’s side. She kisses Nicole awake and a symbol burns into Nicole’s neck, prompting them to kiss again.

Jeremy and Freddy arrive at BBD but refuse Graham’s orders as he answers the phone. He assures them that everything’s under control though Graham didn’t make it. Graham is furious that Jeremy is committing treason, though Jeremy is done letting BBD fuck up Purgatory for everyone. He lets Freddy kill Graham. At Shorty’s, the group celebrates that they can leave Purgatory if they want. Wynonna drapes a blanket over Doc again but their kiss is interrupted by Nicole, who wants to talk about the big thing. Waverly assures everyone that Angel Waverly is gone now that Nicole is the angel shield and they kiss. Nicole begins to say something else until Jeremy jumps in that BBD has retreated from the triangle and if they come back everyone will be ready. Doc marvels that he can see his reflection, meaning that Waverly brought him back as a human as that is what Doc wanted. He wants a fresh start with everything and is about to kiss Wynonna until Nicole interrupts again as she wants to talk about it. Everyone is confused until she states that it’s the wedding. 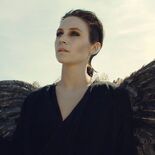