United States
Canada
Purgatory (formerly)
Black Badge Division (BBD) is a special organization that works to keep the world safe from Revenants and Demons. They operate all over the world but are currently stationed in Purgatory, recruiting Earp heir Wynonna to help them kill and capture demons.

Agent Lucado and Richard Moody led the agency until the dissolving of BBD. It was also revealed by Moody that BBD was never a legitimate government agency, but instead worked outside the guidelines of the law.

During the mysterious 18-months that Wynonna spent in the Garden, BBD reassembled with a new group of agents and superiors. This time, they are an official government agency[citation needed] and are led by Deputy Assistant Director Naomi Haitcha. Wynonna Earp and Jeremy Chetri are active agents while notable former agents have been Xavier Dolls, Waverly Earp, and Doc Holliday.

Originally a top-secret branch of Marshals, which was founded in the 1900s by Theodore Roosevelt. It was created so to eradicate paranormal forces that were blossoming on North American soil. Edwin Earp was tasked with handling things there.

In the later 2000s, BBD had a lab, VX19 in a small town called Monument. They assigned multiple scientists and agents to the laboratory to work on a secret project. One day, there was an accident at VX19 sourced at the lab. Before BBD Chernobyled the place, they were experimenting with a gas that didn't react according to their hypotheses. Rachel Valdez was forced out of the town by BBD Marshal Xavier Dolls, who made her leave without her mother - an act the ultimately saved Rachel's life. The remainder of the scientists mutated in a species that can best be described as zombies.

At an unknown point in time, BBD sent a Tomahawk missile to eradicate Maldito, New Mexico. They did this to hide the existence of paranormal forces. The missile only left one crater and resulted in the deaths of thousands of innocent people.

In Keep the Home Fires Burning, Wynonna Earp begins her job as a consultant deputy of the Black Badge Division, recruited for her role as the Earp heir who can kill revenants. She relieves her first assignment from Dolls. After giving a speech on how to behave in public and being discreet, he gives her a standard government-issued gun in place of Peacemaker. This issued gun doesn't last long due to Peacemaker's ability to kill Revenants and demons.

In On the Road Again, Wynonna travels to VX19, Monument, after finding clues that lead her to Gloria Valdez's file in Dolls' old BBD archives. Dr. Valdez was working on a portal to another world, which Wynonna believes could lead to the Garden of Eden where her sister and baby daddy are trapped. She and Nicole Haught speed to the town where they encounter a sniper who they quickly apprehend. They identify the shooter as a teenager Rachel Valdez, the daughter of Dr. Gloria Valdez. Rachel explains to Wynonna and Nicole that BBD abandoned the place after they made it radioactive and comparable to Chernobyl. If they want to access the lab, they have to go around infected scientists who have mutated into zombie-like creatures. Of course, this doesn't go well, and Wynonna awakens the zombies and the women are separated. Rachel warns them about stepping on the grates and when Wynonna accidentally does, Nicole saves her by pushing her out of the way. However, Nicole falls through the grate and is severely injured in the process.

In Friends in Low Places, Rachel and Wynonna hide from the zombies, with Rachel explaining that the zombies used to be brilliant scientists who were working on an inter-dimensional gateway, which Wynonna thinks is a gateway to the Garden. Black Badge was trying to weaponize it but when it opened they panicked and gassed the place. They eventually save Nicole and trigger the inter-dimensional gateway using the zombified scientist's keycards. Wynonna uses this portal to access the Garden of Eden, while Nicole and Rachel use dynamite to escape the lab.

In Look at Them Beans, BBD has used the year and a half that Wynonna is missing to set up a barrier around Purgatory that keeps the demonic creatures inside but allows humans to come and go as they please. They have taken to apprehending criminals and don't pay much attention to the local police force and how they handle some criminals. Jeremy Chetri has seemingly become a border patrol agent.

In Afraid, BBD kidnaps Wynonna and taken her to the new BBD headquarters within Purgatory. She meets Deputy Director Naomi Haitcha and Wynonna pieces together she’s BBD - which isn’t disbanded anymore. Naomi uncuffs her saying she’s glad to have Wynonna back, but Wynonna counters that she is not back working for them. Naomi states they’re on the same team but they need every employee they can get. Wynonna soon learns from Jeremy that this new version of BBD is uneducated in monsters and demons and in way over their heads. The management has never killed demons before, and are instituting a new system of seeing how demons and humans interact in a controlled ecosystem. They're trying to keep the demons inside Purgatory and the humans out.

When it becomes apparent to Wynonna that the town needs her help now more than ever, she outs herself to Naomi as Wynonna Earp, not Arp, and she’s the best demon hunter Black Badge ever saw. She’s done lying and hiding but they don’t have Peacemaker which is why she needs Jeremy back. She needs everybody. She’s going to take back Black Badge in Purgatory and hunt demons. Naomi clarifies that their bosses demand results. Jeremy claims they can get it done with his help. 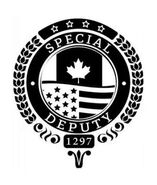