―  Wynonna to the RevenantsWar Paint

The Earp Curse forces all of the people that Wyatt Earp killed using Peacemaker to resurrect and seek the death of the eldest Earp for all of eternity. These resurrected humans are called Revenants and can only be killed by the weapon known as Peacemaker. Only the eldest Earp, known as "the heir" can use the weapon. The curse was broken by Bulshar Clootie in War Paint.

In 1887, the angels Julian and Juan Carlo sought a champion who could wield the flaming sword and eventually kill the snake known as Bulshar Clootie. Juan Carlo, who was in charge of choosing the champion, chose the gunslinger Wyatt Earp. He turned the sword into a more practical weapon for the times, a gun they called Peacemaker. Wyatt was supposed to defend the and the Earp line. e used the weapon to kill 77 humans and eventually killed Bulshar and Constance Clootie's two demonic sons. This caused Wyatt and the Earp line to be cursed by Constance. The curse forced every person Wyatt killed to return as Revenants. The weapon used to kill the revenants, Peacemaker, was forced to remain in the Earp family line as only an Earp could wield the weapon. Bulshar, however, wanted Peacemaker to unlock the Garden of Eden and used the curse to keep the weapon in the Earp line.

The Heir is always the oldest family member alive, and their role is activated on their 27th birthday. The Heir is said to be the only one who can actually fire the gun known as Peacemaker. When an Heir dies, all Revenants killed by the former heir will resurrect again to suffer for all eternity until the next heir turns twenty-seven. If the heir kills all the revenants the curse would be broken.

The Heir so far has been (including years):

The cursed area of land, partially framed by the splitting of the Ghost River into two, that imprisons the resurrected outlaws killed by Wyatt Earp. Should a Revenant cross the boundary line, they experience Hell on Earth.

Wyatt killed Constance and Bulshar Clootie's sons, so Bulshar cursed Wyatt and his descendants. Due to the curse being created by her husband, Constance has detailed knowledge about the curse and the Ghost River Triangle. She also knows spells to get around the curse. 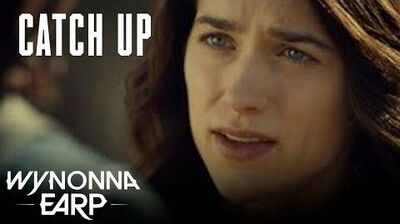